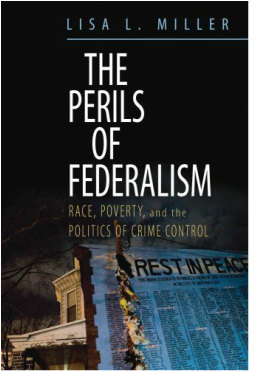 The Perils of Federalism: Race, Poverty and the Politics of Crime Control (2008, Oxford University Press)

​"This is a breakthrough book that for the first time brings structure of American federalism into the center of the analysis of America's punitive turn and the politics of crime control. Miller has produced compelling evidence that our political institutions, rather than our social peculiarities, provide the most significant explanation for our unprecedented degree of punitiveness."--Jonathan Simon, Professor of Law, University of California, Berkeley Law School, and author of Governing through Crime
​
"Miller has produced a powerfully thoughtful empirical analysis of the various ways that American federalism amplifies some conflicts and mutes others in our ongoing debates about how best to reduce the harms associated with crime and punishment....The data provided are rich and multilayered; the argument presented is concise, subtle, and persuasive....Miller's focus on agenda-setting and the relationship between structure and agency make this book an enormous breakthrough....The Perils of Federalism is a must-read."--Law & Politics Book Review 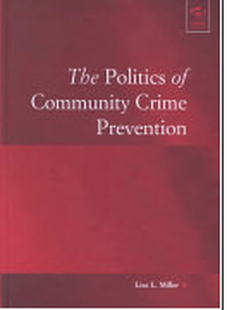 The Politics of Community Crime Prevention explores the complex and often striking differences between national and local perspectives, particularly those of racial minorities, on crime prevention and the role that community residents should play in prevention programs.  The book is a case study of efforts to implement the Department of Justice program Operation Weed and Seed in Seattle, Washington in the 1990s and draws on research on the racial politics of policing, social movements, public policy, and agenda-setting. While Weed and Seed was designed to involve local communities, in practice the program was largely top-down, from the DoJ, to state and local law enforcement and local political leaders. Organized groups in Seattle's target neighborhood -- an historically African-American community -- resisted Weed and Seed because it was insufficiently attentive to local concerns about economic and social development, political empowerment and, in particular, police violence. The book concludes that, while community involvement in crime prevention is a popular phrase, genuine community-centered crime control is focused not simply on pathological individuals and aggressive policing but on broad, economically and educationally based community development and empowerment.  However, most policy to address crime remains largely police-centric, top-down, and individualistic, ignoring the systemic, structural components -- including racial bias -- that lead to crime and violence.
Journal Articles
“American Exceptionalism or Exceptionalism of the Americas? The Politics of Lethal Violence, Punishment and Inequality.” Forthcoming (2020). Journal of the British Academy for the Humanities and Social Sciences. London: British Academy.
​

“The Local and the Legal: American federalism and its implications for the carceral state.” 2011. Special Issue of Criminology and Public Policy: Mass Incarceration 10(3): 725-732.

“The Representational Biases of Federalism: scope and bias in the political process, revisited.” 2007. Perspectives on Politics 5:2: 305-321.

"The Federal/State Criminal Prosecution Nexus: A Case Study in Cooperation and Discretion." 2005. Law and Social Inquiry 30(2): 239-268. With James Eisenstein.

"A Cautionary Note on the Use of Actuarial Risk Assessment Tools for Social Control." Crime and Delinquency 48: 131-161. With Eric Silver.

"Looking for PostModernism in All the Wrong Places: Implementing Weed and Seed in Seattle." British Journal of Criminology 41: 168-184.

"Taking it to the Streets: Reframing Crime Prevention Through Race and Community." Studies in Law, Politics and Society 20: 207-238.
Powered by